Coach Henry A. Kean with the Coach of the Year and Football Co-Championship Trophies in 1954 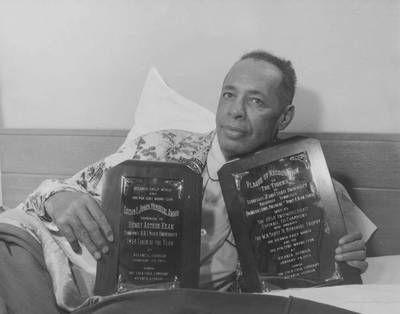 The Football Coach of Tennessee A & I State College, Henry A. Kean Holds the Trophies for the Lucius L. Jones Memorial Award for Coach of the Year and the W. A. Scott, II, Memorial Award for Intercollegiate Football Co-Champions of 1954. The Awards Were Presented in Atlanta on January, 28, 1955. Kean's Keanmen football team won the Black National Championships in 1946, 1947 and 1954. his 24-year football records stood proudly at 162-30-5.